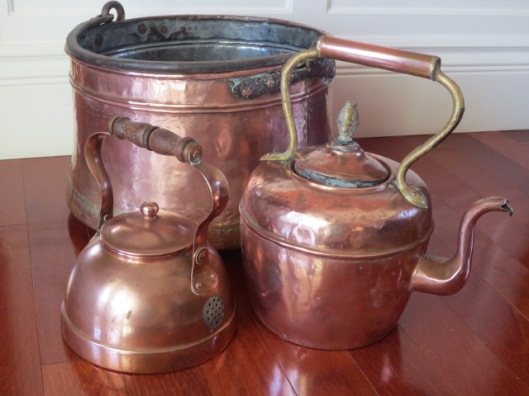 When I was young, I laughed at the notion of antiques. Old stuff. Who in the world would want that? I wanted everything new. For me to be the first to use it. For us to make our own history.

Silver sits on the shelf and shines. Rarely used now, but we collect it because it’s worth something or so we’re told. I imagine the silver spread over long tables in elegant dining rooms where dinner conversations speak of plays and politics and playgrounds like Monaco or Cannes.

But the copper pots…they simmer over servants fires, feed the farmer with thick broth, fill the row houses with the warmth of  hot liquid courage on a cold night when darkness threatens danger. They tell the stories.

Would that we could hear them. 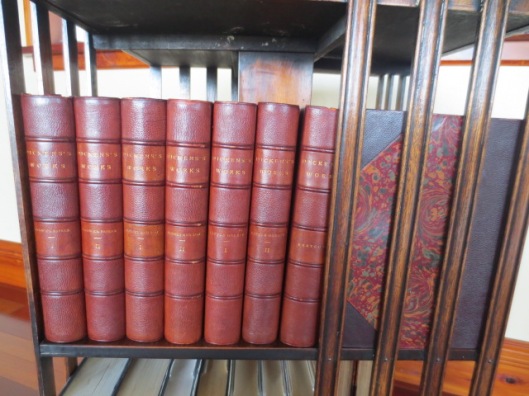 Old books sing their own songs too. Where have they traveled over the many years of their existence? I imagine heads bowed over words, reading by flickering lamplight, wrestling to stay awake until the last page is turned or the lamp goes out. How many oceans have they crossed? How many hands have they passed through? How many souls delighted with the tales they tell?

Would that we could know. 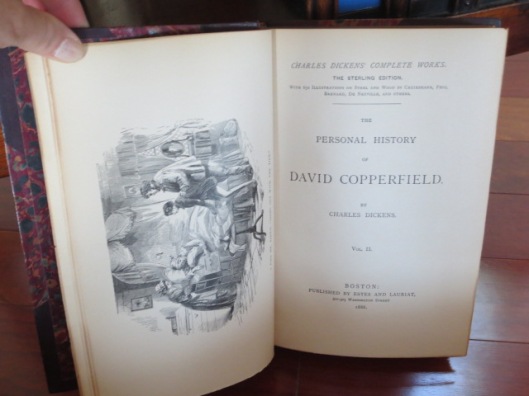 I imagine the mother and daughter cleaning. Cleaning the copper and dusting the books. Dust is removed easily enough. But the copper tarnishes. Stains. Loses it’s sparkle over time. You’ve got to put some effort in to see the shine.

“It’s just moving dirt around. I’ll never get it clean.” She is young, complaining. Would rather be outside. Black dirt streaks the pot she polishes. And the mother smiles.

She smiles because she knows. She has seen. She has heard.

Quietly she takes the cloth and rubs a little harder. Eventually the dirt dissolves and a soft glow turns to gleaming hope. And the girl smiles too.

The mother lays down the cloth and places a gentle finger beneath the girl’s chin. “All things can be made new with a little hard work and perseverance.” Perhaps the mother learned that from her own kin. Perhaps she learned it for herself, the hard way. But she knows it true and teaches the lesson.

And so the copper pots…shining, singing, sail through time and land somehow at my feet. Amidst my ducks and books and other well-lived treasures I have learned to cherish. 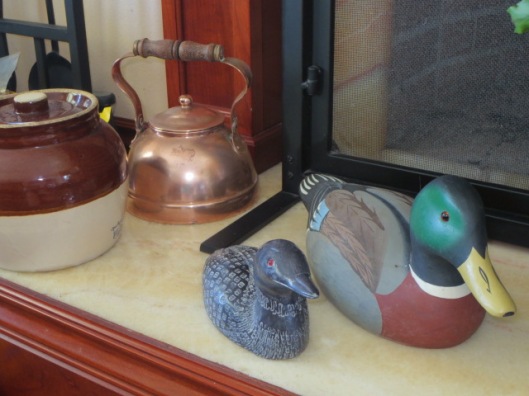 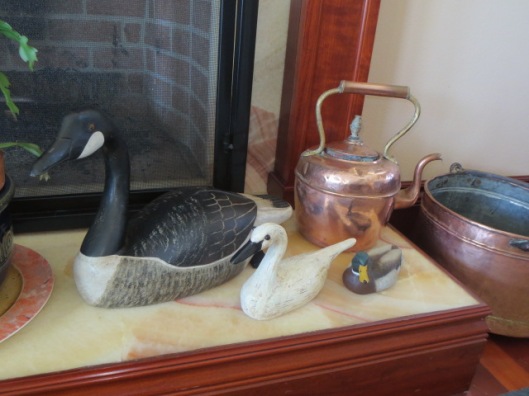 And today I clean the copper.

Today I move the dirt around, slowly. Knowing that eventually, if I keep trying, I will see the shine.

We move through time too quickly, I think, as I wonder what stories these ancient items might tell. Aren’t we always in such a hurry to get the day done, to move on to the next great adventure? We forget to sit and savor. To study the bumps and dents and scars and scratches and remember where they came from.

We want to wake up shiny and new and ready to face the world and maybe take it down in one fell swoop. But wait. Don’t move too fast.

You’ll have to tell it one day.

One day a little hand may slip into yours and you’ll look down at luminous eyes that haven’t seen, precious ears that haven’t heard and a tiny heart with lots of growing room, and they will ask you to tell them your story.

Make it a good one.

Full of grace and hope and truth, faith-filled yet all at once wretched, because you too have been covered in dirt and grime.

But if we live it well, our story, we will know the ending. We will know by then, we have been cleaned, carefully, with such great love. Brought back to almost new, perhaps a little better than, under a tender touch, by the one who waits…waits for however long it takes, until you start to shine.

2 thoughts on “Books and Ducks and Copper Pots”

There was an error retrieving images from Instagram. An attempt will be remade in a few minutes.