I’m excited to have my fellow OakTara author, Sherri Wilson Johnson, author of To Dance Once More, on the blog today! Sherri writes historical romance, and she’s here to tell us all about her journey to publication!

My Road to Publication

I have been writing for as long as I can remember—probably for as long as I have been reading. When I was around the age of eight, I wrote my first short story and have been addicted to writing ever since. My family could not afford a writing school, but that didn’t stop me from dreaming of becoming a Pulitzer Prize winner one day.

In high school, I wrote continuously and took as many writing and literature classes as my school offered. I had high aspirations of becoming a journalist of some kind. I wanted to be the woman sitting in front of the camera doing the evening news or the woman with her own newspaper column. My dream was to go away to a college that had a superior journalism department. Because of my poor grades and a few other issues, I did not attend college though.

Immediately after graduating high school, I began to work in an office as a secretary. I became a fan of romance novels. The problem was: there weren’t very many clean reads out there at the time so I filled my mind with things that it didn’t need to be filled with.

So I decided to write a Christian romance. I wrote on my typewriter at work when there was free time. Somehow I managed to produce a 500-page novel. I guess I wasn’t very busy at work, huh? I sent the novel off to a friend who thought I had a good story so I began the process of polishing it to prepare it for the publisher who would, of course, knock down my door to publish it. After reading a few books on how to write a novel, I decided my novel was no good. So I burned it in the fireplace at home. This was before the days of home computers and none of what I had written was saved on disk. The story was lost forever and I gave up on becoming an author. I consider this one of my greatest professional learning experiences.

I married a few years later, and then had my first child a few years after that. I began writing again while my husband worked at night. Submitting manuscripts or even simple proposals was a time-consuming and expensive hobby. So I shelved my story ideas and concentrated on being a mommy after the birth of my second child in 1994. However, my mind never stopped spinning tales. These ideas gathered in file folders and patiently waited to come out when my children went to school.

Then, God called me to homeschool in 1997 and suddenly my plans were postponed for just a little while longer. Don’t you just love God’s sense of humor? After I got accustomed to the routine of homeschooling, the writing bug bit me again. Instead of fiction, I wrote articles for homeschool magazines and finally got my first phone call from an editor. I was now a published author.

I kept at the writing and got a few more articles published. I took a two-year writer’s course through the Christian Writers Guild and eventually wrote a few Bible studies, which I taught for groups at church. Then I wrote a devotional for homeschool moms, which I self-published.

God used the teaching of my children to refine my writing skills. He opened my eyes to things that needed to be perfected in my works. I wrote several more Bible studies. And eventually wrote three novels—and re-wrote those three novels. Because of easier submissions procedures, I submitted proposals constantly. But the ever-coveted contract never came. I tried to quit writing quite often, but had no success at that either.

I attended my first writer’s conference in 2003 and met several editors, who requested to see manuscripts. I had been told that this was the way to go. For me, this was a one-time luxury because we were a one-income family. I could not attend conferences every year in hopes of finding a publisher. I had to give it my all and leave my writing career right where it needed to be—in the hands of God!

In 2008, I received a contract from OakTara for my novel To Dance Once More (my second “first” novel). After a long and arduous process, it came out in September 2011. My second novel, Song of the Meadowlark, will be coming in June. My third novel, After the Raging Storm, is still in the crock pot and I am writing the sequel to To Dance Once More, entitled To Laugh Once More, at this time. I am actively seeking agent representation and praying God will “enlarge my territory”.

The process for me began in 1974 with that first children’s story. 1985 marked the year of the first full-length manuscript, which perished in the fire. 1993 birthed To Dance Once More. 1997 began my journey through homeschooling and 2011 will forever go down in history as the year that I completed one calling (homeschooling) and launched the ever-awaited career as a writer – I mean, AUTHOR! God has indeed enlarged my territory. I am now a blogger, interviewer, book reviewer, social media coordinator, and novelist! My goal in becoming published was about more than having my book on a bookstore shelf. It was about spreading the news of God’s great love to my readers. Of course, winning the Pulitzer would be fine, too!

About To Dance Once More 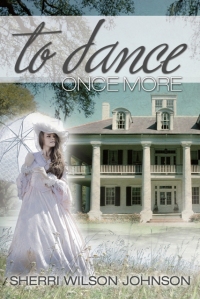 Debutante Lydia Jane Barrington lives a carefree, protected existence on Live Oaks Plantation in Florida. But while her sisters happily learn the traditional tasks of women and talk of courting, Lydia dreams of adventure and independence. Even her friendship with handsome Hamilton Scarbrough isn’t enough to hold her back.

Then one day Hamilton opens Lydia’s eyes and her heart to love. But before they can receive permission to court, Lydia overhears a secret conversation about an unscrupulous business deal. Worse, it has everything to do with her and her future. Now she’s faced with the biggest decision of her life—to concede or to fight. Either choice will require great sacrifice…and, perhaps, countless rewards.

About Sherri
Sherri Wilson Johnson is the author of To Dance Once More (Sept 2011) and Song of the Meadowlark (June 2012). She is from Georgia, has been married since 1988, and is a former homeschooling mom. She loves to write, read, and make people laugh. She loves Jesus and hopes to spread His love to the whole world through her writing.
Connect With Sherri!
Blog
Website
Twitter